Andy Carvin, who has covered the ouster of Muammar Gaddafi in Libya and other conflicts, realized he had post-traumatic stress disorder when he was cooking penne pasta for his children.

As the pasta was boiling on the stove, Carvin, founder of NPR’s social media desk and now a senior fellow at the Atlantic Council’s Digital Forensic Research Lab, had a panic attack. Instead of seeing pasta, he saw arteries. And it wasn’t just penne: Even the sight of cauliflower and melons made him think of brains.

“They were direct associations in my mind to scenes that I had either witnessed directly  in footage from citizen journalists or things that I had followed on Twitter purely through text but had to create back in my mind to understand,” Carvin said in a talk at ONA19.

From natural disasters to mass shootings, the news today is filled with horror and tragedies. While viewers can turn off their televisions and block everything out, journalists can’t.

About nine of 10  journalists reported experiencing at least four traumatic situations, according to a 2008 study. As eyewitnesses to disasters, journalists are likely to experience PTSD and other mental health issues.

According to the American Psychiatric Association, psychological trauma can occur just by witnessing an event. That can lead to PTSD if the symptoms persist for a month or more.

The Dart Center for Journalism and Trauma says that between 4% and 59% of journalists may experience PTSD depending on the beats they cover and where they work.

“There are situations of journalists who have never been to a war zone, never covered a natural disaster,” said Carvin, who in 2014 founded Reported.ly, a social media site focused on human rights and social justice.

“But they are exposed to aspects of it because they are photo editors, video editors, multimedia editors, social media editors or in some cases line editors who are expected to read a lot of copy coming from a particular place where people and other reporters are experiencing trauma.”

Reporters don’t have to witness an event to suffer from PTSD. They also can experience vicarious trauma from interviewing or working with other people who have witnessed or experienced pain, fear and terror.

Vicarious trauma is usually associated with mental health therapists who counsel traumatized clients. But  journalists can experience it as well, Carvin said.

“It’s almost like the mental equivalent to secondhand smoke,” Carvin said. “You might not be there experiencing it yourself directly, but exposure to descriptions of the trauma, when intensive and often continuous enough, can cause them as well.”

While not as powerful as firsthand trauma, secondhand trauma can cause the same symptoms such as loss of sleep or appetite.

Elana Newman, research director at the Dart Center, said first responders such as firefighters and paramedics experience this type of trauma, but journalists are prone to it as well.

Jim MacMillan, a journalist and journalism educator, has studied journalism and trauma as a Dart Center Ochberg Fellow. He began experiencing secondhand trauma after the 9/11 attacks.

MacMillan said newsrooms are improving their emphasis on mental health, but not nearly fast enough.

A war reporter and photographer, MacMillan began to notice symptoms of PTSD. He had trouble sleeping, experienced memory loss and still stutters while discussing events like 9/11.

In 2007, MacMillan was part of the Ochberg Fellowship, a seminar that brings together journalists from around the world who wish to deepen their knowledge of trauma and improve coverage of violence. It was there that he learned about post-traumatic growth: when someone is able to overcome trauma, but also learn and grow from it.

“Trauma isn’t a weakness,” MacMillan said. “It is more of an injury than an illness.”

Los Angeles Times reporter Sonali Kohli has covered mass shootings, children’s deaths and fatal fires. Such heavy material left her feeling on edge: her heart racing when she heard police sirens, terror when she was near candles or bonfires. Her therapist told her to take a break, but she didn’t listen.

The symptoms increased as she kept reporting on local California tragedies. Kohli’s therapist told her she was having PTSD,  and she decided to take a three-week break from work.

Before shutting down and logging off social media, she posted a Twitter thread, advocating for journalists to take care of their mental health:

“I was really happy to see the feedback that I got from the thread that I put on Twitter and how many people seem to relate,” Kohli said. “I know that there were some newsrooms that had conversations about it, and I think that a lot of other journalists have been talking about it, too.”

Journalists who have experienced trauma have found comfort within each other.

Carvin created a Facebook group called Journalism and Trauma — “a safe space for journalists to discuss all aspects of trauma: exposure to trauma in the field, vicarious trauma, how to engage sources that have experienced trauma, and news management’s duty of care to protect their reporters and the public.” The group has nearly 1,500 members.

Addressing the mental health of journalists may take some time, but Carvin has a simple solution: cute animal videos.

“Cat videos … I cannot recommend them enough,” Carvin said. “Cat videos, puppy videos, whatever it is that makes you laugh and smile. As silly as it sounds, that actually makes a difference.”

At a Self-Care for Journalists panel on Friday, Chaseedaw Giles, social media manager for Kaiser Health News, recommended keeping an information diet — a balance of more serious and lighthearted news.

She added that it is important for journalists while working to take breaks and step away from their desks. Giles recommended practicing mindfulness and meditation. Some meditation apps she suggested are Ten Percent Happier, Calm, Insight Timer and Headspace.

“We all have bad mental health days,” Giles said. “We all have days where we’re really stressed out, we’re tired — and you shouldn’t feel like you have to hide that in order to maintain your job.”

International journalists face a bigger challenge to be hired in the U.S. 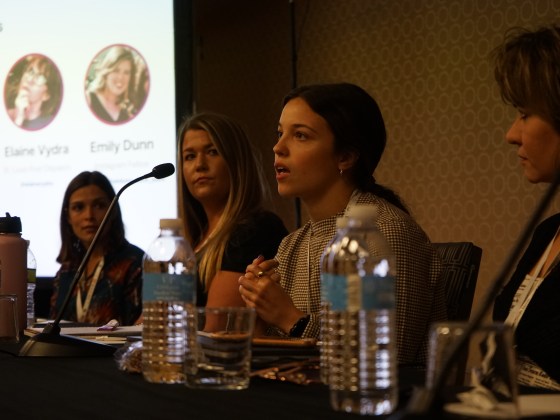 Tap for more: How vertical screens and horizontal storytelling are moving newsrooms more toward a ‘mobile-first’ world