It was a matter of minutes into ONA’s opening panel Thursday morning before Nikole Hannah-Jones, a New York Times Magazine staff writer, voiced a concern weighing on the minds of many of the journalists gathered from around the world: Newsrooms don’t reflect the communities they cover, and audiences know it.

“We cannot have trust as long as the reporters that we are sending out into our country don’t look like the communities that they’re covering,” Hannah-Jones said.

Reporters “are coming back with stories that are not reflective of the experiences of the communities that we’re covering,” she continued. “We have a long tradition of not covering communities well and not being trustworthy.”

"What can we do to improve diversity?" "Hire people of color" @nhannahjones #ONA17

The data backs up Hannah-Jones’ point. The American Society of News Editors’ latest survey of newsroom diversity released in 2016 found that “minority journalists” comprised only 17 percent of the newsroom workforce. Compare that to the demographics of the U.S., in which black, Latino and Asian-Americans make up almost 37 percent of the population, and the disparity between news organizations and their communities is even starker.

With a charged political climate rife with stories at the intersection of race, gender and identity, newsrooms face difficult questions: How can newsrooms improve their coverage of underrepresented communities? What are organizations doing to recruit and retain journalists of color? Is it enough?

“I think [newsrooms] are sort of stunned and playing catch up because this new normal that we’re in is so foreign in so many ways, including the way in which race is infused in everything in a really overt way,” said Angie Chuang, a professor of journalism at University of Colorado-Boulder who studies race and identity. “Now that we’re in an era where Charlottesville happens, when the Take a Knee protests happen, there’s no avoiding it.”

Journalists of color interviewed at ONA said accurately writing about traditionally underrepresented communities feels more imperative in the Trump era, where race is an unavoidable aspect of news coverage.

Ed Guzman, who recently started a new role as The Seattle Times’ assistant metro editor focusing on race and gender, said diversity is at the forefront because “we’re literally talking about our survival as an industry.”

Young journalists are also concerned about the industry’s lack of diversity, and feel the impact when newsrooms have few people of color on staff.

Adriana Lacy, a senior journalism student at Pennsylvania State University, covers the university’s football team for a local website. She said she’s seen the biggest gap in diversity when working in sports media.

“I think the changes have been subtle but important in terms of stuff we’ve done with the task force and what we hope to accomplish with this new beat that we’ve created,” Guzman said. “Now that this position exists or this emphasis exists, I feel like some people in the newsroom have felt more comfortable bringing up certain story ideas that maybe they wouldn’t have before.”

At ONA, company leaders and hiring managers gathered in a Friday afternoon workshop to discuss best practices for hiring and retaining diverse employees. Media companies are intensifying their original approaches to addressing diversity and inclusion within their organizations.

CNN is no exception. S. Mitra Kalita, vice president of programming at CNN Digital, told the workshop attendees that if a news website does not include diverse people, the organization’s recruitment strategy is flawed.

“On the CNN homepage, are we allowed to have all white male pictures? No, and that is policed every single shift,” Kalita said Friday. “It’s a good journalism strategy, but to divorce the content of your media outlet from recruitment is a grave mistake because today is not about recruitment alone. It’s about representation and inclusivity in your journalism.”

Fiza Pirani, a content producer for the Atlanta Journal-Constitution, applauded her company’s diverse leadership and 30-some person team dedicated to diversity events, which she said has grown over the past few years.

The AJC’s parent company, Cox Media Group, recently invited Muslim leaders in Atlanta to discuss media coverage of their community. The leaders suggested that the AJC needed to cover the community outside of times of crisis.

“I’m probably the only Muslim in the organization, and I did have a conversation with our editor, especially during Ramadan,” Pirani said.

“I’m just talking about covering the news, a community,” Pirani continued. “It is a passion point, it’s something I ache for. You need diversity in newsrooms to have that perspective.”

Ethar El-Katatney, an executive producer at AJ+, said diversity is her company’s strength. Her team alone speaks 10 to 12 different languages and has connections to communities around the world, which lends itself well to the organization’s journalism.

In a pitch meeting at @ajplus after Charlottesville, we realized our newsroom was lacking representation – of white men! Diverse newsrooms ftw. #ONA17

That diversity, she said, “is actually super, super amazing, because you get pitches that you would never get in other places just because that’s their communities, especially in the digital sphere where we get a lot of our pitches from what people saw online.”

But El-Katatney admits that AJ+ could improve its approach to socioeconomic diversity, especially when it comes to offering paid internships.

Socioeconomic diversity has been a key focus for Heather Bryant, a journalist and director of Project Facet, which helps newsrooms develop collaborative partnerships. After publishing a widely read Medium post about class status in journalism, she is developing questions for a survey of journalists’ life experiences to see if they vary widely from the experiences of most Americans.

I'm currently working on a survey about socioeconomic/class diversity in journalism. Will soon be live at https://t.co/wEs6tyzgDW #ONA17

Bryant hopes to present the results of the survey at a future ONA conference to jump-start a conversation about how socioeconomic status fits into conversations about diversity.

“Our audiences know when we really don’t understand or get their perspective,” Bryant said. “I think that’s a significant part of the audience trust question. They’re not always wrong when they say that the media is kind of elite because sometimes we really are, and I think it’s something to reflect on.”

And for journalists looking to turn those reflections into action, Chuang has some advice on how to improve coverage of diverse communities.

“I always tell my students: you need to deliberately engineer your own life and your own social circles outside of journalism to look like the kinds of stories you want to write,” Chuang said.

“If you make a deliberate effort in all aspects of your life, professional and personal, to expose yourself to as many different kinds of people as possible, you’re going to recognize your biases faster as opposed to being blind to them.” 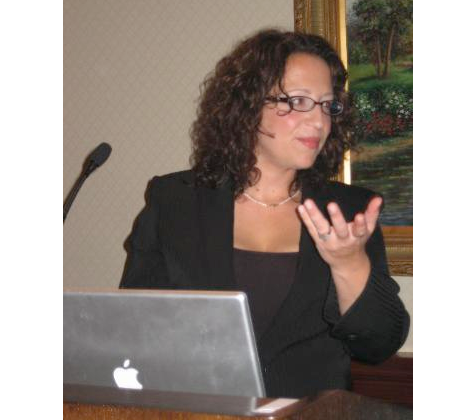 Was she right? A look back at Amy Webb’s first tech trends talk