With so much fact and fiction crowding the internet, it can be hard to separate fact from fiction–an essential task for media outlets today.

There are many ways in which journalism outlets and technology companies are dealing with this issue, and here are three discussed in the ONA session, “Fact Checking: One Year Into the Fact Check and Just Getting Started,” on Thursday.

“The media has issues with public trust overall,  and fact checkers are grappling with that and how to get credible information to people who are more casual consumers of news,” says Angie Holan, editor of PolitiFact.

It’s been a year since Google began asking publishers to bury invisible tags in the code of their web pages that allows search engines to identify the statement and the speakers behind a fact check.

What Google is calling the Schema project will display the story on Google News with a fact-checked tag. The Schema project was a collaborative effort by Google, Bing, Yahoo and the Russian search engine Yandex. Schema has so far been used by publications like PolitiFact, which has also been using the tool to track the origins of their web traffic.

Focused on checking the accuracy of statements made by political figures, The Washington Post ‘Fact Checker’ is a constant feature of both the website and the Sunday paper. The website sometimes includes a rating scale of Pinocchio faces rating factual statements.

Recently, they’ve also added a “reader rating”  to allow readers to vote what they think the rating should be. Readers take the Pinocchio rating seriously, often emailing when they may have accidentally clicked on the wrong rating, said the Post’s Glenn Kessler.

During the 2016 Presidential election, Facebook’s newsfeed was besieged with factually inaccurate political stories and advertisements from questionable sources.

In the wake of these issues, Facebook has developed a way to combat potentially unreliable sources that are infiltrating news feeds. Users flag suspicious posts, which appear in a dashboard to be checked by third-party sources like PolitiFact and Factcheck.org.

If those third parties deem it inaccurate, the post is then removed from Facebook’s news feed. These are just three examples of innovations in fact checking, but media and technology companies are continuously working on ways to get the facts out. 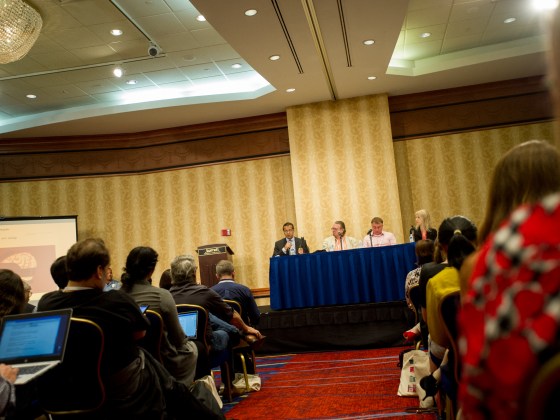 With safety in mind, session goes off the record

This time, the Wi-Fi is up to the ONA challenge