This year’s winning entries for the ONA18 Online Journalism Awards captured the spirit of a tumultuous year, documenting racism in American cities, mass shootings and the failure of schools to protect students from sexual abuse. Even a few stories of #MeToo found the way on stage.

The honorees of this year’s 35 OJA awards were selected from among 103 finalists and winners. Twenty-two judges made the decisions on the most profound digital stories, selected from 1,100 entries winnowed by nearly 120 screeners.

ProPublica earned the most awards with four to its name (and two shared with another news organization). A close second was The New York Times with three awards. The Miami Herald, The GroundTruth Project and Arizona State University followed with two awards each.

Throughout the evening, many presenters focused on the hope represented by the finalists and recipients.

“Despite dwindling press freedom, attacks on journalists and declining trust in media, here we are at the end of a conference that focuses on the future of our industry, experimentation, working more closely with our audiences and making some money while we’re at it,” said P. Kim Bui, ONA board member and co-chair of the OJAs.

“This—that— is what the world needs right now. We need more of the excitement, the hope, the energy that we all have gathered at this conference … we all believe in the power of democracy and storytelling.”

Two major themes were evident in this year’s awards: diversity and engagement. Throughout the conference, presenters reminded attendees that the best of journalism should represent the people it serves, and the presenters and award recipients of the night appeared to represent with greater diversity than past years.

The room of journalists remained subdued for most of the night, echoing a year in which many in the media have felt under attack. Recipients used light anecdotes and references to popular figures to earn quick moments of laughter.

Managing Editor Rick Hirsch accepted the Miami Herald’s award for explanatory reporting in a medium newsroom for its story on the illegal gold pipeline in Miami thanking Pope Francis for going to Peru to highlight the gold industry and amplifying the Herald’s coverage.

“Is that the first time Pope Francis has been thanked at the OJAs?” asked the night’s emcee, Niala Boodhoo, host and executive producer of the Illinois Public Radio show The 21st.

The passionate speeches of the recipients promised journalism will continue to reveal unseen stories in American cities for years to come.

“This is for all for all of the journalists fighting for the truth,” said Nicole Tung, recipient of the 2018 James Foley Award for Conflict Reporting. “And particularly for my fellow freelancers, who despite the risks and limited safety that we have, believe that what we do is still necessary—perhaps now more than ever.”

ProPublica won General Excellence in Online Reporting for a medium newsroom. It also collected the Al Neuharth Innovation in Investigative Journalism Award in a medium newsroom for “Trump Town,” its piece exploring the administration’s hiring practices.

ProPublica and the Florida Times Union won the award for explanatory reporting in a medium newsroom for “Walking While Black,” an investigative piece on the disparity in jaywalking arrests in Florida between white people and people of color. ProPublica and New York Magazine also won the large newsroom award in features for “A Betrayal.”

The New York Times won the award for breaking news reporting in a large newsroom for its coverage of the mass shooting in Las Vegas titled “The Vegas Massacre.” The Times also took the sports award, large newsroom, for the coverage of this year’s Winter Olympics. The award for online commentary was won by “Nicholas Kristof and Colleagues.”

In addition to its award for best explanatory reporting in a medium newsroom, the Miami Herald won best breaking news coverage of Florida International University bridge collapse in the medium newsroom class. “I will tell you, I’ve been a part of a lot of breaking news stories in Miami, from hurricanes to riots. I’ve never been more proud of a staff and have never seen one respond with so much intensity,” Hirsch said.

Arizona State University tied for third place with two awards for pro-am student and best small student newsroom. The GroundTruth Project took home two awards, one for audio storytelling and one for excellence and innovation in visual storytelling, small newsroom in collaboration with FRONTLINE.

The general excellence awards were won by The Washington Post (large), ProPublica (medium), The Marshall Project (small) and The Trace (micro).

Multiple acceptance speeches mentioned the importance of the collaboration among newsrooms to tell stories.

“We complain a lot, as internet humans we call ourselves. It’s hard to get people to care about a story and put it online,” said KUT’s Andrew Weber. “With this story, the importance of it was not the case at all. This was an entire newsroom effort, everyone contributed. Don’t remember me. Remember the newsroom.” 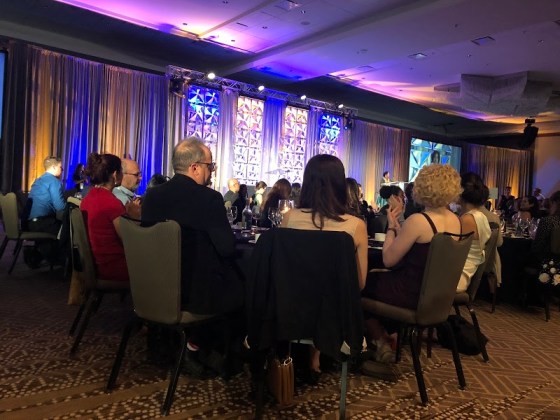 Liveblogs from the OJAs: Behind the Scenes 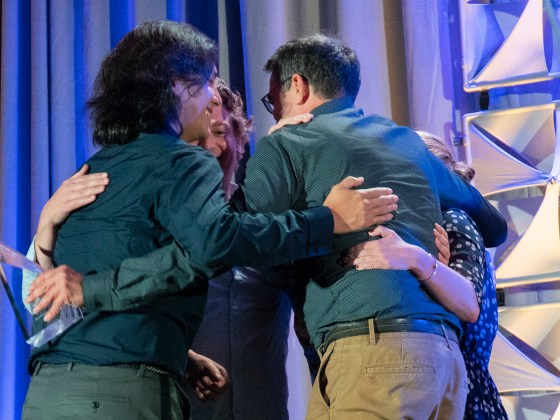