Jim MacMillan was one of the first photojournalists to head to lower Manhattan on 9/11.

Later he jumped on a plane to cover the first war in Iraq in 2004.

He was one of those adrenaline-junky journalists — thrill-seeking, heedless, crazy — who head to war and conflict at the drop of a hat.

He was part of an Associated Press team that won a 2005 Pulitzer Prize for Breaking News Photography, but he also came home with blackouts and sleeplessness, and no sense that he was suffering from post-traumatic stress disorder (PTSD).

“I wouldn’t say that I regret what I did, but I really wish I’d gone into it more informed,” said MacMillan in an interview at ONA18.

MacMillan described the sobering moment when he asked one of his friends to go to a recently released movie. His friend told him that they had watched that movie together before. (He can’t remember the name of the film.)

That was when he knew that the pre-9/11-person named Jim,  wasn’t around anymore.

It was because of the trauma.

Symptoms of PTSD include intrusive recollection of past traumatic events and avoidance of reminders of those events.

MacMillan also recalled months of sleeplessness and constant mental confusion, which made simple tasks like packing a “go bag” for his work travel seem too complex to complete.

The tip of the iceberg

It was after covering the 9/11 attacks that he had difficulties bouncing back to normal life.

However, he learned that covering the terror attacks was only one of the traumatic events that affected him. The work covering U.S. forces in Iraq won him a piece of the Pulitzer Prize, but it didn’t help protect him from the effects of covering war.

Just 25 percent of media outlets offer counseling to journalists who cover traumatic events, according to a 2015 report published by the National Center for PTSD, but some experts recommend actually planning for the trauma in advance.

Of course, journalists “cannot prepare themselves 100 percent for such traumatizing events,” said psychologist Dr. Jo Eckler, speaking at an ONA18 panel on about trauma response planning.

But “rehearsing worst-case scenarios and knowing what things trigger and bother journalists the most” could mitigate the aftermath of vicarious traumas that journalists can encounter, said Eckler, who worked with the US Department of Veteran Affairs for more than a decade dealing with trauma and PTSD.

“Covering rough stories would for a long time might result in a cumulative effect,” Eckler said. And as journalists get used to being in constant distress, being in safe spots could, surprisingly, become a source of discomfort.

The guilt of leaving them behind

Back recently from Raqqa, Syria, which is the former de-facto capital of ISIS, photojournalist Nicole Tung spoke about the guilt that she feels when leaving conflict zones.

Tung, the recipient of the 2018 James Foley Award for Conflict Reporting, has been a photojournalist for almost a decade. Shortly after she graduated from college, she hopped on a plane to Libya to cover the revolutions that toppled the Gaddafi regime.

As the war came to an end in Libya, the war in Syria was becoming more compelling to photojournalists like Tung and her friend James Foley, so they headed headed to yet another conflict zone. Foley was beheaded by an ISIS fighter in 2014, and Tung said that his death “made her think and rethink what she was doing.”

Foley’s death showed her how devastating the loss of a loved one covering conflicts would be for their family and loved ones who suffer after they lose them.

“Don’t jump right into the deep end of the pool”

Despite his concern about whether his stories were worth the risk to his life and his psychological well-being, MacMillan said he’s very proud of his contributions to the world of journalism.

The veteran photojournalist sees no point in second-guessing himself and what he has achieved throughout his career. But he also has some tips for aspiring journalists who would like to go into conflict areas.

He believes that risk-takers have to “work through the levels of conflict rather than jumping right into the deep end of the pool.”

These include trying to live somewhere where they don’t quite fit in, and later in a country where they don’t look like everybody else, and maybe don’t speak the language. Then they might be ready to enter a conflict zone.

This strategy could help build a psychological immunity that might mitigate the aftermath of covering traumatic stories, MacMillan said.

For those who would seek psychological help when returning home, prohibitively expensive therapy and counseling can create a chilling effect, especially if they are freelancers like Tung.

While she says  she’s has not suffered any major symptoms of trauma, the loud noises of planes still unsettle her as a result of the war jets that hovered over her head while she was covering the war in Aleppo, Syria. Sadly, if Tung felt the need for treatment, the absence of an official employer limits her options.

At the end of the day, it’s too easy to forget that journalists are human beings who need to care for themselves in the same way they care for the well-being of their subjects.

The obligation of bearing witness

Why do some journalists put their lives on the edge to cover the news from regions that normal people are usually fleeing? Both MacMillan and Tung had the same answer for this question.

“You are obliged to bear witness,” MacMillan said. 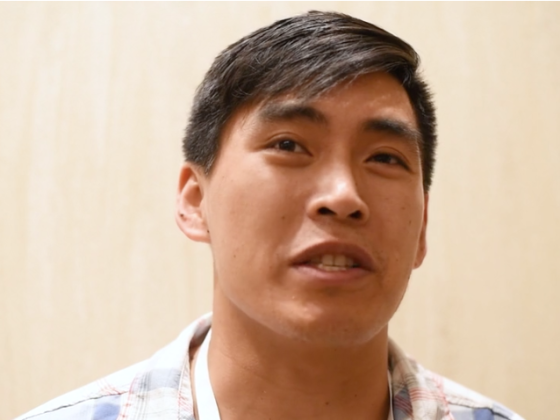 Looking ahead: Thoughts on the future of journalism