Hard-to-find at points, these tasty treats were much in demand at ONA18’s opening reception at Austin City Limits Live at the Moody Theater on Thursday night.

Lines wrapped around the outside of the venue as ONA attendees eagerly waited to reunite with friends, enjoy some good food, and get their drink on.

People were so hungry after a long first day that they went as far as hovering around the kitchen door to snag hors d’oeuvres while they were fresh.

Aside from the fleeting fancy food, live music performed by a local country band called The Lost Pines kept the crowd’s energy levels up. The group opened with their popular song “How Mountain Girls Can Love,” and partygoers at the front of the hall line danced. The rest of the crowd, however, didn’t hear much of the music over all of the laughter and conversation.

In the music hall, dimmed lights, free drinks and a photo booth set the mood for reunions among former colleagues and friends.

“Walking around here is like a constant reunion,” said Danny Gawlowski from the Seattle Times. “Every corner I turn, I run into someone else I haven’t seen in 10 or 20 years. OK, not 20. I’m not that old,” he joked.

For many of the journalists interviewed, ONA18 is either their first or second conference and they said they fully intend to return in the future.

“My favorite part about this party was the opportunity to meet so many different people and to have so many robust conversations about things I’m interested in and they’re interested in,” said Tamer Abouleinein from Newswhip. 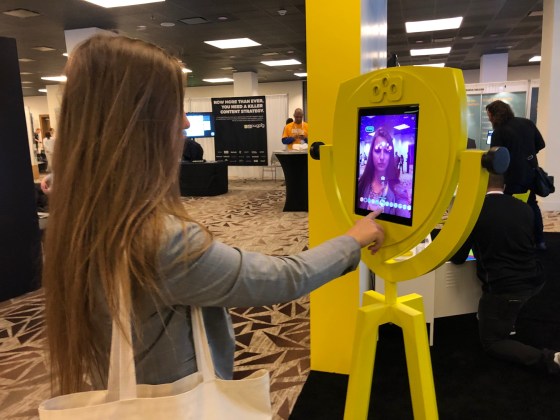 Five exhibits to visit before you leave ONA18