Every year journalists from across the world attend the Online News Association Conference looking to gain new tips to improve their digital skills and get an edge on the competition. With nearly 100 workshop sessions at ONA16 and 30 companies participating, attendees receive tons of information about tools they can use to improve the work they do.

But when they leave the conference, they’re confronted with the challenge of how to implement what they’ve learned. “It’s exhausting, the sheer number of tools that we’re exposed to,” said Heather Bryant, a John S. Knight Journalism Fellow. But she said the conference “is a safe space to ask, ‘how do I actually apply this in my newsroom,’” she said.

According to Brian Manzullo, a web editor at the Detroit Free Press, his company started using the metrics tool Chartbeat three years ago after learning about it at the conference. “We use it with our real-time analytics to see how articles are doing,” he said. It has helped his newsroom to increase engagement with readers.

Kathy Scarbeck attended Facebook’s “Live Video for News” session, where the company said it would be releasing a dual screen option for its live video that will allow people to talk to one another while in different locations. Scarbeck, an executive editor at Frontline Medical News said she plans to experiment with Facebook Live in an interview format for her company, which creates content for medical professionals. She said live video is useful to show concepts that are not always visually appealing to her audience. As for Facebook’s new dual screen option, she said, “Once that’s live, I can almost guarantee that we’ll try it out.”

Veronica Villafañe, editor and publisher of Media Moves, covering Latinos in the media industry said she’s planning to update her website over the next few months with Google AMP —  accelerated mobile pages — that allows users to build fast-rendering web pages for mobile devices. “It’s all about speed,” she said. “How do you make sure what you’re doing is user friendly?” Part of meeting user needs is making sure download speeds keep up, especially on mobile, which is being used at an increasing rate.

Cecilio Padilla, a web producer for CBS in West Sacramento, said his newsroom has a 360-video camera and wanted to learn best practices for using it at ONA16. He attended a 360-video session and said he’ll use those tip and “plans to send a reporter out to try it.”

ONA attendees understand the importance of trying to tools and building new skills to keep up with technology’s growing impact on news. “We have to keep evolving and we have to accept the changing technology and adapt to it,” Villafañe said.

For many journalists, a time of transition 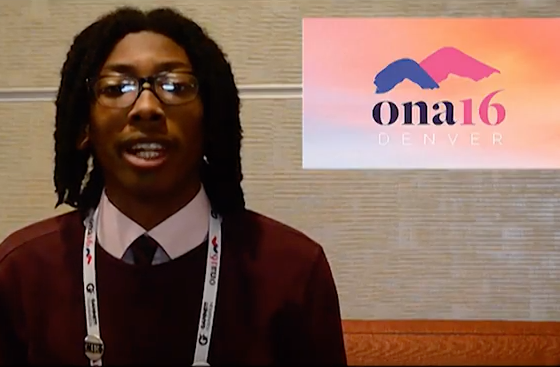