Filled with attendees eager to maneuver through the world of digital media and journalism, the Online News Association (ONA) conference has proven to be a great place for people to network and to learn to apply their new skills in news ways. It turns out new digital skills and tried and true journalism skills make a solid professional combination for many journalists. It can make the difference between career longevity and a career dead end. Some journalists find that after leaving journalism with the right skills they can return again.

Liz Enochs, currently a senior editor for Charles Schwab, is one of many who have left journalism only longing to return to a career they call home. After working for Duke University’s student newspaper, Enochs spent a few years traveling the world. She eventually stumbled upon a writing opportunity at an independent, investigative Zimbabwean magazine.

When Enochs returned to the United States after a year with an interest in business journalism and economics. She wrote for various publications before transitioning out of journalism and into her position at Charles Schwab, a financial company.

“It was the right time for me,” Enochs said. “I wanted something different.”

She is among a number of journalists looking to transition back into the profession. But they face apprehension, anxiety, and uncertainty about the health of journalism. The Bureau of Labor Statistics reported that jobs for reporters, correspondents and broadcast news analysts are expected to decline by 9 percent from 2014 to 2024. In addition, an Indiana University study showed a steady decline in journalists’ satisfaction in the field from 49 percent in 1971 to 29 percent in 2013. This dissatisfaction stemmed from pay cuts, overwork and lack of autonomy, which contributed to many people leaving the field.

But those who can develop skills more in demand with the profession today, such as the ability to analyze data and work with numbers, may find more opportunity. For example, Enochs said her background in journalism and economics suited the Charles Schwab position perfectly and it allowed her to approach writing in an alternative way.  “Having a journalism perspective in a marketing role really helped a lot,” Enochs said.

Enochs kept her hand in journalism by serving on the board of the Society of Professional Journalists Northern California chapter and as the co-chair of the San Francisco Public Press. She says she misses journalism and is now reconnecting with old colleagues to get back to the career that she loves.

Given journalism’s focus on metrics, she said the analytical skills she’s gained from Charles Schwab would be invaluable as she re-enters the journalism field.

Similarly, Kim Bui, the former deputy managing editor of Reported.ly, found leaving journalism was a mistake. Her career has been filled with twists and turns as she has been laid off in four separate journalism jobs.

Bui ventured into marketing at ConsumerTrack, a digital customer acquisition company after her first layoff as a managing web editor. Bui’s time at ConsumerTrack was filled working with developers, project managers, interns and freelancers. She also revamped the company’s editorial process and organized a budget plan to make the workflow easier.

“I was making a lot of money, but I knew it wasn’t something that I wanted to do,” Bui said. “I wasn’t happy and I’m the kind of person that needs to be happy with work.”

“I wasn’t interested in the content at all, but it was a really great experience,” Bui said. She said that she enjoyed knowing how much industries outside of journalism paid and valued their workers. While with ConsumerTrack, Bui began working with ONA and planning sessions for the organization, which led to her second job in journalism.

“ConsumerTrack put me on the path to getting the product jobs that I later got in journalism,” she said.

Leaving the field is not the end of road for journalists. The skills gained as a working journalist are in demand in other professions and can be easily transferred to many other fields.

Battinto Batts, the director of the Journalism Fund for the Scripps Howard Foundation at E. W. Scripps Company, said those looking to enter or re-enter the journalism should take advantage of new tools and utilize social media and blogs to build their writing skills.

Batts began his career as a reporter before entering marketing and higher education. As the director of the fund, Batts leads initiatives in training, education and development that help students and professionals.

He said journalists utilize social media and blogs to fine tune their writing skills, build their brand and practice their craft.

“Anyone can decide at any given time, that they want to be a journalist. They don’t necessarily have to go to work for a corporation, they can do it on their own,” Batts said.
“Journalism is a calling. It’s not something that you can truly ever separate yourself from,” Batts said about his career. “Once you’re a journalist, you’re always a journalist.” 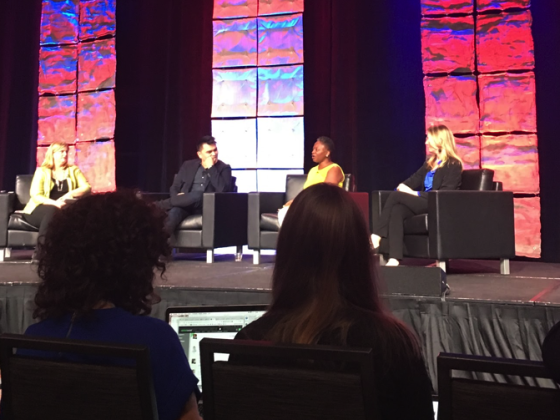 The sprint to comprehensive race coverage

Taking tools from conference to the newsroom