Competition is a constant battle among today’s journalists, especially in the fast-paced digital world.  The side effects: stress and anxiety, which journalists say they’re reluctant to publicly discuss.

ONA15’s “Table Talks: Professional Development” highlighted this ongoing issue and how journalists have trouble dealing with imposter syndrome, management identity and other effects.

“Admitting that you are struggling is the toughest. Saying, ‘I’m not doing all right’ is not part of the journalism culture,” said reported.ly managing editor and co-host  Kim Bui.

Changes in the journalism industry have led to staff cutbacks and increased workload on existing employees, which can cause imposter syndrome. Journalists on the panel say that syndrome means they doubt their own abilities — in other words, they feel like imposters in their newsrooms. Self-doubt can not only destroy their craft, but also hurt their mental well-being.

Most journalists hide their feelings and don’t talk about it among colleagues, said those at the table talks.

Bui’s group also discussed management identity in the newsroom and how most journalists can’t define their positions. In the digital sphere, it’s common for journalists to not only be writers, but to also to serve as editors, photographers and tech support. There is no structure for journalists fulfilling multiple roles at once, they say.

The panelists, who were reluctant to go on the record with specific issues, said they suffer from anxiety because work often doesn’t end at a set time every day, so they have to constantly check emails and phone calls off the clock. Without upper management establishing some sort of balance, journalists are often spread too thin on assignments and don’t have time to think about their own wellbeing, they say.

Jennifer Brandel, founder and CEO of Hearken and another co-host, talked about how journalists often struggle to make time for themselves outside of the newsroom.

“I’ve been thinking of balance as an aggregate over a lifetime,” she said. “There will be more phases of chilling and ones where you are flying as fast as you can.”

Despite the psychological distress, there are solutions. Therapy and establishing industry allies can help journalists discuss personal struggles in a safe environment, the group said. Newsrooms also could expand wellness programs and provide health insurance coverage for mental health, Brandel and others agreed.

Bui said journalists need to be able to talk about their problems as a community and find support during hard times.

“When we are suffering through struggles we have a tendency to think we are alone,” she said. “But hearing it from someone else is amazing.” 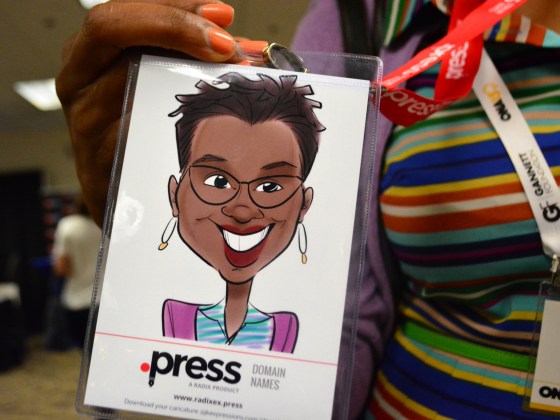 Journalists line up to be caricatured

Get your big ideas to work in small newsrooms