Press pass photos are like drivers license pictures. You don’t show them unless you have to.

Unless the picture on your press pass is drawn by caricaturist Julia Kelly.

More than 90 journalists stood in line the first two days of the conference to get one of the stylized press card images at the .Press booth in the Midway.

Here’s what the process looked like for Debra Bass, of the St. Louis Post-Dispatch:

Some journalists waited about an hour in line. But they seemed happy with the results.

Having too much fun at #ONA15 with these caricatures from @DotPressDomains. ? pic.twitter.com/LeOO9ltJxM

.Press is a domain extension catering to journalists who want a unique online presence for personal websites and blogs, similar to an online press pass.

Parag Barhate, Radix category manager, said this is the first year the company has hired a caricature artist for the Online News Association conference.

“There is a role caricatures play in bringing out news in a more funny, palatable way,” said Barhate.

.Press has an ongoing Twitter contest where people can tweet @DotPressDomains with the hashtag #ONA15 with their caricature and be entered to win a drone. Winners will be announced mid-afternoon Saturday.

Super cute caricature at the @DotPressDomains booth at #ONA15. Thanks!!! pic.twitter.com/0mkA0i2FZQ

Debra Bass, fashion editor with the St. Louis Post-Dispatch, said the 40-minute wait in line was like an “icebreaker” because she got to network with other journalists.

“Everybody likes seeing the novelty of seeing the cartoon of yourself, like a little avatar,” said Bass.

The wall of caricatures behind Kelly represents the diversity of journalists at the ONA conference.

Alex Schaffert said the caricature was a spitting image of herself, down to light brown/blonde hair, hazel eyes and rectangular framed glasses.

“It was absolutely worth the wait,” said Schaffert, who works with Southern California Radio. “I admire that she cranks it out one after the other.”

Despite sketching, coloring, and printing caricatures all day, Kelly said she doesn’t get physically tired. She says every face is a new caricature experience and making people happy is the fun part of her job.

Since 2010, Kelly has been drawing caricatures at various shows across the county. Her lines usually don’t exceed five or six people, but so far she has drawn at least 100 journalists at the ONA conference. 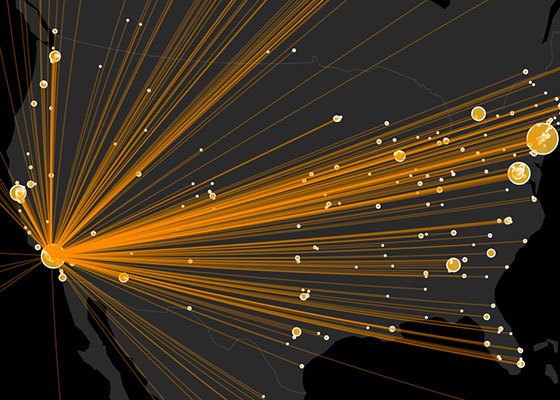 #ONA15 Attendees by the Numbers