The launch of For Journalism may fill that gap.

Dave Stanton, the founder of For Journalism, had the idea for a while, and in March it finally came to fruition.

The goal is to make data and coding relevant and accessible to journalists. “Journalists don’t want to be programmers or else they would have gone through engineering school,” Stanton says. “Nobody is doing data journalism training on a mass scale, a comprehensive masters-level curriculum. That’s how we arrived where we’re at.”

Stanton chose Kickstarter as a way to gauge enthusiasm and interest in pursuing the idea. The response was positive, the money was raised and now For Journalism is about to open up its first two courses on Django and responsive design. The courses will be free for ONA members.

One of the 10 course instructors, Travis Swicegood hopes to demystify the perception of data journalists. “So many people in the journalism space look to people who are data reporters or do interactive work as almost these mythical animals,” says Swicegood, Texas Tribune news apps and data editor. “You’re just a unicorn that just exists out there as something else.”

To supplement the video lessons, Stanton hopes to create a collaborative environment that can allow users to assist each other. Instead of using forums, where you go to find the answer but not to learn the solution, Stanton is exploring Google hangouts. If one person gets stuck at a certain point, they can work through the problem in real-time with someone having a similar problem or who has already solved it.

“I would rather foster a space for participants to solve their own problems either solo or in teams versus just ‘I’m stuck, where’s the answer’ and copy-paste the answer just to clear that blocker and move on.”

Stanton broke down the lesson template into four sections:

So far Stanton has one university partner in Montclair State University. They also have two media partners who bought newsroom licenses in NBC News and Digital First Media.

The money raised is for paying instructors for their time spent creating the lessons.

Now Stanton is looking for grants to make the project sustainable in the long term. “We really want it to be a career-long learning vehicle,” he says.

Going forward he wants to open it up to more schools and provide tools to instructors to augment their teaching. The bottom line is more education of data to journalists around the world.

“There’s 20, 30, 40 conversations at ONA about this kind of idea,” Stanton says. “How do we take education further? How do we make journalism training more broad, more scalable, more approachable? We’re just trying to figure that out and we’re taking one attempt.” 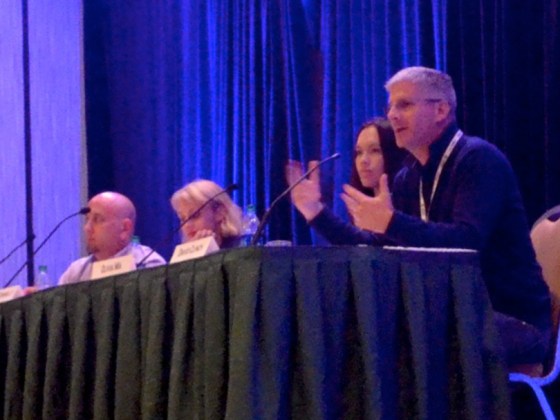