Boston bombing coverage and the NSA files highlighted the 2013 Online Journalism Awards at the Atlanta Marriott Marquis in Atlanta, Ga.

Boston University News Service won two awards for its coverage of the Boston Marathon Bombings – one in the category of breaking News/Small; the other in the Student Projects/Large category. The BostonGlobe.com and Boston.com took the award for Breaking News/Large with their Boston Marathon bombing coverage.

“Among body parts and blood on the street, they pushed past their fears and made the story happen,” said a stunned Boston University Professor Michelle Johnson, who oversaw BU’s news coverage.

Steve Goldbloom, a producer for San Francisco’s Independent Television Service, hosted the awards banquet but had some help via an introduction video starring Goldbloom and past OJA host PBS NewsHour’s Hari Sreenivasan, poking fun at the PBS website’s traffic. He also said that Google had provided Google Glass for people under their chairs, which soon became clear wasn’t the case.

“This is an online journalism conference; you’ll be leaving with nothing more than a CNN tote bag,” Goldbloom said.

“It’s been an extraordinary five months, this really tops it,” she said.

In planned news, the first award of the night went to Denise Hassanzade Ajiri, 2012 MJ Bear Fellow, for Iran Election Watch (small). ProPublica (medium) and NPR (large) rounded out the category with its U.S. election coverage.

It wasn’t all journalism talk. One table filled with journalists from The Boston Globe, Boston.com and the local NPR affiliate, WBUR, watched Game 6 of Major League Baseball’s American League Championship Series between the Detroit Tigers and Boston Red Sox on an iPad.

Winners accepted awards from Rich Beckman, University of Miami Knight chair in Visual Journalism, and Jim Brady, ONA president. The panel of 24 judges, who included journalists from outlets like ProPublica, Mother Jones magazine and the Los Angeles Times, helped select the finalists, of which 12 judges made the final selections in September.

The John S. and James L. Knight Foundation, as well as the Gannett Foundation, contributed almost $38,000 in prize money, which accompanied nine of the 30 awards handed out.

Since 2000, the Online Journalism Awards, hosted by the Online News Association in partnership with the University of Miami School of Communication, has recognized excellence in digital journalism.

Explanatory Reporting, Medium
America Under the Gun: A Special Report on Gun Laws and the Rise of Mass Shootings, Mother Jones 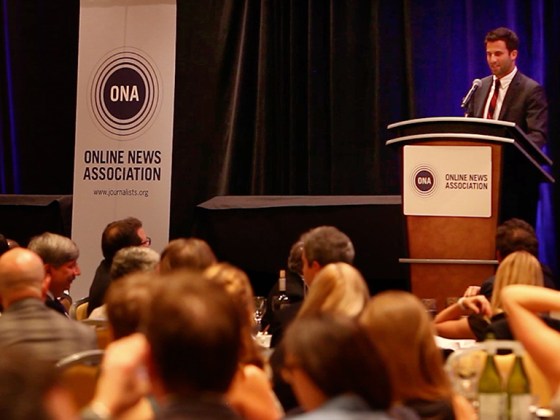