Andrew Phelps started his career as a freelance reporter for a local California newspaper. Armed with a degree in political science, he just liked to report.

When he became a staff writer at the Nieman Journalism Lab, he had an idea for a Web-based news application called Fuego that tracks journalists on social media. He didn’t know exactly how to develop it but he picked up some books, taught himself a little code and accomplished his goal.

Phelps, among others, thinks it’s a good idea for all journalists to be able to write a little code and understand data.

No one expects you to build an iPhone application. These skills are highly recommended:

Programming lingo – API, agile processes, functions. Knowing what you can and can’t do with technology is important for communicating your ideas and collaborating with developers on larger applications.

HTML/CSS – Not a true programming language, but a markup syntax and presentation layer that serve as the backbone of the web.

Data literacy – Can you make sense of a huge Excel spreadsheet of numbers? Knowing where to get data and how to visualize it can greatly improve reporting skills.

“I think a lot of people hear that and worry that they need to be computer science and math geeks,” Phelps said. “Being a programmer isn’t the same as learning to write some code.”

This skill set allows Phelps to stand out as an online journalist.

“In a market where jobs are scarce, which is journalism, and where technology is becoming a central part of the craft, people have to differentiate themselves from everyone else who can write and edit. Being able to design and code apps that tell stories in new ways gives journalists an edge,” he said.

John Bracken, the director of media innovation at the Knight Foundation, said he has witnessed this at newsrooms across the country.

“Having some fluency with code is great,” Bracken said. “From a talent perspective, there’s a constant search for talented engineers. ProPublica is hiring. Neiman Lab is hiring.

“The days where the technologist who lived in the basement who you saw once every couple of weeks, those days have passed. You see engineers actively involved in the newsroom.”

Bracken and the Knight Foundation recently handed out more than $2.2 million in the form of six awards in the Knight News Project Challenge for data.

One of those six awards went to Joe Germuska, news application developer at the Chicago Tribune. His project, census.ire.org, makes it easier for reporters to access and incorporate census data in their stories. The project started last year, but through the Knight Foundation grant, he hopes to improve the app and add new functionality.

“I think the possibility of grounding your stories in facts is nice,” Germuska said of the importance of data. “Anecdotal judgment can be wrong. I’m a believer in evidence and raw data.”

Data takes you beyond the anecdote, LaFleur said during her presentation. She said that, at a base level, every journalist should be able to open up Excel, have good online search skills and knowledge of the importance of data.

No one interviewed suggested that every journalist must also be an expert programmer, but rather being able to understand and communicate with technical people is the key skill.

Chrys Wu is the global coordinator of Hacks/Hackers, an organization that brings together journalists and programmers so that they can learn from each other.

“Not everyone is going to be good at (programming) and the last thing we need in this world is more bad code,” Wu said. “That said, it’s important to understand it, as far as having respect for the work coders do. Understanding how to work collaboratively with (programmers) is really important.”

Want to learn but not sure how?

Online tutorials—Interactive programming tutorials are becoming commonplace on the Web, both free (Codecademy) and paid (Treehouse). Start with an HTML/CSS track and, if you love it, give Javascript a shot.

Attend meet-ups—Get involved with the technology community and see what you can learn from the people around you. Organize a group on meetup.com or see if there’s a local chapter of Hacks/Hackers.

Come up with a project—Andrew Phelps came up with the idea for Fuego before knowing how to make it. “When you have a goal,” he said, “it becomes much easier to learn the code.”

Programming is not solely a question of innate talent, according to Wu. One also requires frequent practice and tenacity, which can lead to fluency.

“Learning code is like learning a foreign language,” she said.

Phelps also equated learning code to learning a new language. But unlike traditional human languages, programming languages rarely change. When the code doesn’t work it’s almost certainly a human problem and not a computer problem. This objectivity allows for a process of trial-and-error where, if something doesn’t work, you can just try again.

Sources agree that the shift to the Web is inevitable. No one has all the answers for this transitional time for online news, but placing more technology-oriented people in journalism is one strategy.

“Put non-traditional people in a newsroom to force journalists to cover stories in new and different ways and expand the reach of the organization,” Phelps said. “People are going to go where they can get news fastest and easiest. That drives a lot of traditional journalists crazy, but we need to go where the audience is.”

Wu made clear that reporters must be able to, above all other skills, report ethically and tell a story. But with the demand for new technology in journalism, eliminating the fear among journalists and demystifying the magic around code might be today’s greatest challenge.

Interactive feature: Eliminate your fear of code and type some now 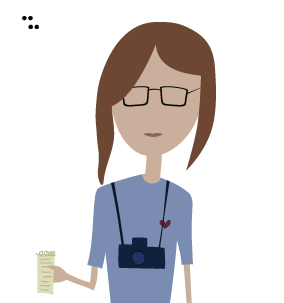 Anatomy of a New Journalist