For Mat Mullen and the startup community, San Francisco is a culture of T-shirts.

“The shirt is the cheapest form of advertising,” said Mullen, who works in business development for Disqus. “But it’s also a sign of identity and what you’re proud of.”

It’s also a form of connection, the real-life equivalent of a hashtag, a visual note to startup employees  in San Francisco who share similar interests.

“There are like-minded people that do what I do, that if I went to a different city, it wouldn’t exist,” said Mullen.

Disqus, a cross-website comment platform, formed in 2007 and currently operates in an office at Beale and Howard streets in San Francisco. In their office alone, Mullen said, there are at least 40 other startups. In other offices, San Francisco hosts no fewer than 640 startups, according to the Mayor’s Office of Civic Innovation. With such a large concentration of these companies, the city is arguably the tech startup capitol of the world.

Earlier this month, San Francisco Mayor Ed Lee dedicated October as Innovation Month as part of a rollout of policies designed to help tech companies. Besides an interactive map that identifies startups and investors in San Francisco, the city’s November ballot initiative Proposition E replaces a payroll tax with a gross receipts tax, an idea loved by many, including startups.

Culturally and economically San Francisco is the ideal breeding ground for tech companies.

Lee’s efforts impress Burt Herman, a co-founder and chief strategist for Storify. It’s smart of the mayor, he said, because these startups can boost the local economy.

“These companies are bringing jobs to the city and going into neighborhoods, hopefully helping improve life in the city,” said Herman

These new employees bring with them a high level of energy, said Patrick Randolph, vice president of business development for Talkwheel. San Francisco retains a unique vibe, where every engineer wants to work on what they’re passionate about, he said.

“It’s not ‘It can’t be done’ when somebody says something, it’s ‘how do we do it,’”  Randolph said. “There may be a million obstacles, but you know what, let’s do it.”

And Randolph has done it. He and friends developed Talkwheel, a framework that organizes conversations visually in a circle, while attending Hamilton College in 2009. There was no other option but starting in San Francisco for Randolph.

“Anyone can come here in their twenties, even teenagers, with an idea,” said Randolph. “If you work hard, you have the chance to be a millionaire, billionaire or make a real impact on the world.”

Cybil Wallace, editorial director for UStream, suggests that these local startups are looking towards the future.

“We’re doing this, but what’s the next thing we can do to improve our model?” said Wallace.

Ustream launched in March 2007, and settled to San Francisco under former CEO John Ham in 2010. Wallace notes that the energized crowd in this location seeps into the surrounding area.

“You’ll be on a hike in the Marin Headlands, pass a couple of people and they’ll be talking about some new technology,” said Wallace. “You’re in the wilderness, and you’ll think ‘Where are we?’”

As for the uniform of San Francisco techies, she agrees that T-shirts are standard protocol, but her colleague Terry Parris, Jr., a community editor, is already planning ahead. 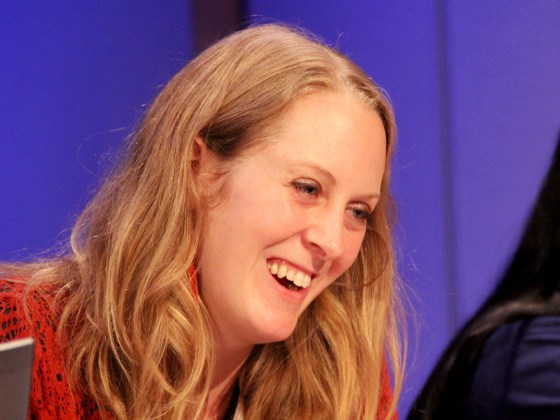 Q and A with Liz Heron on Her Share-worthy Strategies