The first thing Katrice Hardy she did when she got off the plane in Greenville, South Carolina, was to scour the aisles of Home Depot for flashlights.

She then drove to the Greenville News, dropped the flashlights on the office floor and spent three hours at the office planning coverage for the week ahead.

“I thought my place was to be here with the community, making sure that we’re providing them with all the information and engaging stories that we can,” she said.

Hardy, the executive editor of the Greenville News and Southeast regional editor for USA Today Network, flew back before heading to Austin and the start of ONA18 Wednesday night to ensure the safety of her reporters, photographers and editors as they chronicle Hurricane Florence.

Much of USA Today’s leadership team is attending the conference and staying in touch with their teams through morning and afternoon conference calls.  Over the past few days, the USA Today team has worked on building a relief crew so the original crew can rest and recharge if there is still coverage needed next week, Hardy said. Replacements will come from Florida and Tennessee. In addition, the network sent a drone team to document the storm.

Hardy’s team uses Google alerts and CrowdTangle “to make sure we’re covering all the bases for our community. We’re answering all the questions they have, and we’re staying on top of what our staff needs to execute their coverage.”

USA Today opened its paywall Monday morning. “So we’re pushing that out, trying to let people know that they can get all this coverage for free,” she said.

Bill Cannon, USA Today’s manager of content strategy,  said his team looked at stories from previous years to find what did well in an effort to improve popular stories. His team has found interesting stories by looking through Google trends and other social sites.

The team also seeks out less serious stories that capture what is going on around the rest of the country as well, he said.

On a national level, most of the responsibility lies in allocating resources and setting plans for disaster far in advance, said Amalie Nash, executive editor for local news at USA Today. Plans have been set since June for a hurricane or tropical storm. The manual is more than 10 pages long, she said.

The biggest challenge of disaster coverage is trying to answer the public’s questions while making sure to include phenomenal storytelling about those trying to help, Hardy said.

USA Today tries to highlight the plight of individuals in the storm. “From those helping with evacuation to those who choose to ride out the storm,” she said. “What’s the storm going to be like for them?”

One of Hardy’s primary responsibilities is to ensure the safety of her newsroom. She dutifully stocked the newsroom with portable batteries, snacks and water, and she made arrangements for hotel rooms and rental cars for those covering the storm.

“We had two folks on an island, a photographer and a reporter, and we had to move them a little further back,” she said, which is where they are now. “They definitely wanted to stay, but safety was a concern there. We’ve been staying in close contact with them with regular check-ins, trying to get them to rest when needed.

“They want to go full speed ahead, but we want to make sure that they’re well taken care of and rested and taking care of themselves while we cover the storm.

Her other concern lies in making sure reporters have enough time off to do their job well. “When you’re covering something like this, it’s nonstop,” Hardy said, “and we’re saying ‘rest, rest, rest’ but they’re not getting the rest they would if they were home.”

While breaking news is much faster paced than daily coverage, it does not diminish the reporters’ ability to tell compelling stories, she said.

“It’s the same reporting skills that make for a great story — great details, narrative, digging, asking the tough questions, still being a watchdog reporter, that still applies to breaking news,” Hardy said.  “That’s what makes what we do special, I think, and what helps us serve our community in the best way.” 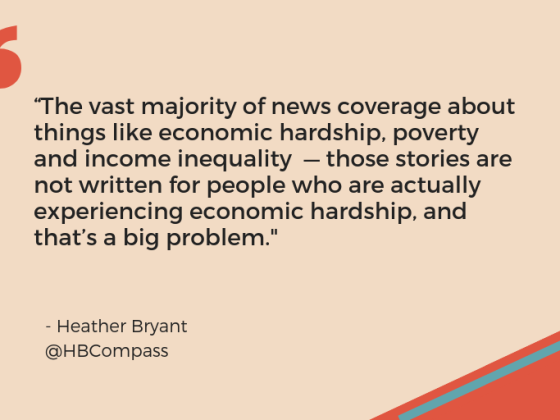 Now what? How to apply your ONA18 knowledge when you get home