When Fergus Bell and Frederica Cherubini pitched their “Male Allies Toolkit” session at ONA, the idea was to create a safe space so that those present could be honest about their stories.

On Thursday, those attending found a unique format where those on the panel were recorded but not those in the audience.

“We are going to be recording this session,”  Bell, a consultant and journalist for Dig Deep Media, told a room three-quarters filled with men. “This recording will pick up our voices. It won’t pick up your voices in any degree that is useful in identifying people.”

Janine Warner, ICFJ fellow and executive director of SembraMedia explained: “One of the first things I did in that room was to try to create a space where well-intentioned men could not be embarrassed to admit what they don’t know and didn’t have to worry about being attacked for saying the wrong thing.

“The men who came to the male allies session were men I knew who were at least trying to do the right thing.”

The #MeToo movement has spurred multiple conversations about misogyny in the workplace. Bell and Cherubini, head of knowledge sharing for Condé Nast International, wanted the panel to shift the conversation from what women can do for themselves to what men can do to empower women. Attitudes like mansplaining and discrediting the work of women can greatly hamper those in the workplace.

As an educator with power, Alfred Hermida said this was an important session for him at ONA.

“I thought that it was important to see what I could do and what I could learn from that panel so I could learn how someone like myself … could help out the women around me,” said Hermida, director of the journalism program at the University of British Columbia.

“[Men] can call things out in a way that is more diplomatic sometimes or will be accepted in a way that perhaps when I call it out will be just be seen as a gender thing,” said Angela Pacienza, a panelist and head of experience for the Globe and Mail.

One of the topics the panel discussed was how men can be allies without being patronizing to women. Pacienza said reading the room in a work environment is key for allies. Warner added that men calling out men out might not be the best idea, but pulling them aside afterward is a better approach.

“Most men are really uncomfortable if you call them out in front of a group of people — that’s just been my experience working with them,” Warner said.

Another topic for the panelists was language. For example, never using “girl” when referring to women is one of many starting points for men.

“I will call out a man or a woman if they use the word girl when they’re not talking about a girl,” Bell said. “I just correct them and say ‘you mean woman.’ The reaction I’ve had is ‘Oh, I call everyone girl’ and ‘I don’t mean anything by it.’”

Additionally, Bell said he has eliminated gendered curse words in his vocabulary.

When dealing with people who use misogynistic language in the newsroom, Pacienza advised having one-on-one conversations with people and establishing that not everyone is perfect.

“Coming to a conversation and saying none of us are perfect but when you did this, this is how it makes other people feel, can be valuable,” Pacienza said.

After the panel, Hermida said he learned how to frame ideas better and how having male allies who empower women will improve everything in a journalism publication.

“If you’re a male in a position of power, what can you do to create spaces for others to take power and have authority?” he asked. “How can you create space for others to have agency? Because really this is what we’re talking about.” 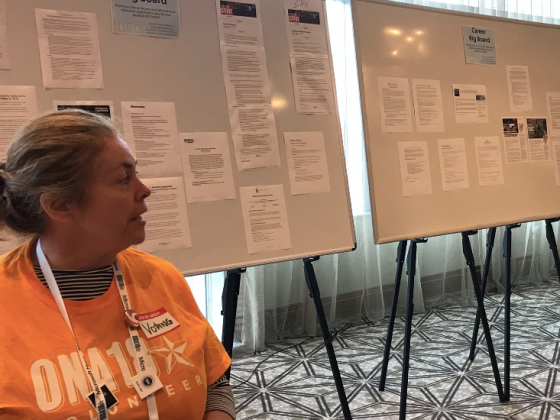 Give your resume the razzle-dazzle: Design tips from ONA professionals

When covering mass shootings, can journalists do better?