The two-hour drive home to Virginia with my boyfriend was unbearable.

I tried going through all the different scenarios in my head, and none of them turned out well.

How would I tell my extremely proud parents that their 19-year-old daughter was pregnant?

That Labor Day weekend almost two years ago, I felt like everything I had worked so hard for was about to fall apart.

I was a sophomore at Penn State and I participated in everything: I was an honors student, a Penn State Lion Ambassador, orientation leader and manager of the baseball team.

“The last person I ever dated”

Pete was on the team, and that’s how we met. We started dating my freshman year.

Pete grew up in York, Pennsylvania, hunting, fishing and riding dirt bikes and four wheelers.  He’s happiest active and outdoors. He is still a kid at heart, but he’s always been intelligent and funny. To me, he was a perfect 11.

We spent almost every weekend together that summer after my freshman year. We shared goals and dreams—like living by the water with a lot of land—and we loved planning for our future together. I knew Pete would be the last person I ever dated.

But nothing we discussed had prepared us for breaking the news to my parents.

Under extreme pressure to succeed

At the time, it seemed like a bigger deal for me than it was for Pete.

I thought all of my past accomplishments defined me, and I had to live up to the name I had made for myself. The pressure to keep up the good work was immense and completely overwhelming.

My dream of becoming a journalist seemed closer when I got accepted into a four-year program at the Emma Bowen Foundation, which provided me the opportunity to intern at a top 10 local television news station—WTTG FOX 5 in Washington.

Taking care of a baby together

Then I found out we were having a baby. I worried about all the people I would be disappointing. That’s all I could think about during that drive. Was there a way to get through this? Would everyone think differently of me?

I knew there was no way I was getting rid of this kid. My parents taught me to always take responsibility for my actions, and that meant I was going through with it and raising this baby—with Pete, who asked me to marry him on December 23, 2014. We also knew we wanted to finish college and planned to get married after we earned our degrees.

Now, we had to get everyone else on board.

My mother instinctively knew what was going on before I ever told her.  My dad, however, was stunned when I finally worked up the courage to tell him. He didn’t say much, but we all agreed that Pete and I planned on finishing school. We just didn’t know how. Pete and I returned to Penn State later that same day.

Getting through college together

A few days later, when I finally heard back from my dad, my doubts began to disappear. He wanted to meet Pete’s parents, and have us all sit down and talk to decide how we were going to make it through this enormous life change.

A couple of weeks later, we met at Pete’s parents’ home in York. They all told us they wanted to help support us through college. They knew how important it was for us to finish our degrees so we started planning—budgeting for housing, a baby and child care so we could attend classes.

I’ll never forget the feeling of a huge weight being lifted off my shoulders. Now I felt like we were planning a journey rather than fixing a problem.

Even though my daughter wasn’t planned, the timing of her birth couldn’t have been any better.  She arrived at the end of my sophomore year.  She was due April 29, the birthday of my best friend Brittany Nicole Kirk, who passed away in 2009. We named our daughter Elena Nicole.

Worrying about being a good parent

My biggest fear the last two weeks of my pregnancy was about being a parent. I grew up helping take care of my nieces and nephews, but having my own kid? That’s a whole other story.

I wasn’t worried so much about the diaper changing and potty training. I was worried about the real parenting—how to talk her through bullies and breakups and having to wipe her tears when girls were mean to her. I went through too much of the latter, and I was scared she would, too.

But the day came that Miss Elena Nicole arrived, and I couldn’t have been happier.

Finally holding her in my arms after nine months of carrying her was euphoric. No words can describe my emotions that day—or for the next three weeks. I cried at least twice a day because of how happy I was with her. She was perfect. She was mine.

Budgeting to pay for everything

The past 16 months with Elena have by far been the best of my life. Our parents help out by providing a monthly stipend to help pay for rent, groceries and gas. Pete and I budget the money we earn with our jobs and summer internships to cover other bills. I’ve also been given Penn State’s child care subsidy award. The program helps pay 75 percent of her daycare bill.

Pete’s in-state tuition is covered by grants, scholarships and loans. My out-of-state tuition bill, after all grants and loans have been applied, is roughly $9,000. My Emma Bowen Foundation matching scholarship pays for about half of the bill, and I pay the rest out of pocket.

I have had to miss out on certain college experiences. But it’s the little things I miss: getting my hair and nails done, reading, refining my writing skills and being in a choir. I don’t have much time for that any more because my little nugget consumes so much time.

My world completely revolves around her. One day recently, I had a 1,000-word essay to write, a social video to produce and an interview to shoot. But all I could think about was how long Elena was at day care and feeling awful about it.

Despite having a lot of work to do, I picked her up. And eventually, I finished all my work that day.  Never mind between all the times she peeks over my laptop to ask me to play with her.  When she grabs my fingers and tries to get me up, I can’t resist.

Elena has helped me grow in so many ways. I’ve learned to prioritize, be patient and ultimately, be an adult.

I’m especially grateful for the constant love and support we receive from our families and friends. We’re blessed to have such a great support system. Without the help of my friends, my attendance at ONA16 would make life a lot harder for Pete. Thankfully, I have great friends who are willing to help watch Elena while he finishes his class work.

I know my college experience has been significantly different for me than it is for other people my age, and I have Elena to thank. She gives me something to look forward to every day and pushes me to give more than my best.

Having a baby in college didn’t ruin my life. It changed my life—for the better. I have everything I could ask for, and now Pete, Elena and I get to experience life’s journey together. 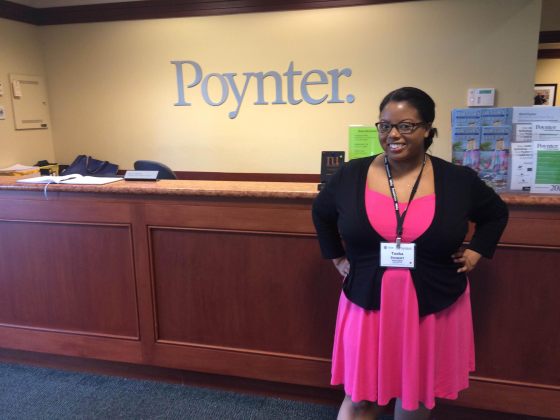 Confronting the Challenges: Q &A With a Female Newsroom Leader