Nate Silver has been called many things: a witch, a statistician/journalist and, now, a data rock star who can pack a room at ONA. Speaking to a packed auditorium for today’s ONA Keynote, Silver explained what journalists can learn from statisticians. The auditorium’s capacity was more than 1,400 and almost every seat was filled.

As he guided the audience through the finer points of data analysis, Silver highlighted the ways he sees the journalistic community falling short. Much of the list came straight from an “Intro to Statistics” syllabus — “correlation is not causation” — but Silver also made points about the nature of bias and the seductive properties of outliers.

“Distinguishing correlation from causation is very challenging in many respects,” he said. “Sometimes the desire of journalists to tell stories or narratives can make this especially acute in the field.” When there are 19 polls that agree and one that says something different, he added, the media tends to pick up on the outlier because it’s a more compelling story. Unfortunately, it’s also usually wrong, he said.

Silver explained that though he straddles the world of journalism and statistics, he feels more at home with the data nerds than the storytellers. It should be noted, however, that Silver’s presentation demonstrated he knew something about how to please an audience. His eight-slide presentation would have been more at home on BuzzFeed than the New York Times, consisting entirely of a “Top 8” list paired with photos of cute animals and Ryan Gosling.

His slides may have been cute, but Silver’s tone was earnest as he outlined a new vision for data journalism. “Searching for the root cause is what statistics is really all about,” he said.

With FiveThirtyEight.com, Silver will be aim to put his data journalism prescriptions into practice. 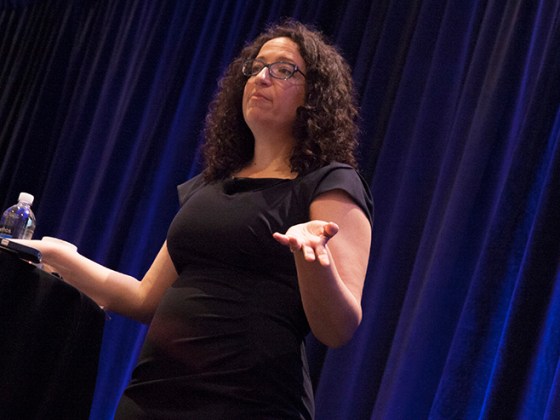 Webb: Search will come to you